We've joined forces with Let's Talk Menopause to bring you their expert talks series! This month, we're sharing their Q&A with Dr. Maria Uloko about low libido, what it is, and what you can do about it.

Dr. Maria Uloko is a urologist who specializes in the treatment of female sexual dysfunction, female sexual pain, low libido, hormone therapy and more. Let’s Talk Menopause spoke to Dr. Uloko about low libido as one in three women in perimenopause and beyond experience it. For additional help, Dr. Uloko recommends visiting the International Society for the Study of Women's Sexual Health’s (ISSWSH) website to find a sexual medicine trained physician near you.

Medically speaking, what is low libido? How is it connected to the menopause transition?

Low libido is defined as a lack of interest in sex or sexual activity. There is a strong correlation between low libido and menopause because one of the causes of low libido is a lack of hormones or a hormonal imbalance. When people transition into menopause, what’s essentially happening is that the ovaries have run out of its ovarian reserve. Due to this, hormones that are associated with preparing the eggs for ovulation are no longer produced. Three hormones we must consider are estrogen, progesterone and testosterone. People with ovaries actually make a thousand times more testosterone than they do estrogen and yet for some reason we mostly think of only estrogen as the “female” hormone. As perimenopause begins there is a significant drop in all hormones.

Additionally, there are many social and emotional factors that affect libido during the menopause transition. It’s not only a body transition, but a life one as well. Perimenopause tends to happen when people are dealing with raising kids, taking care of aging parents, and coping with job stress. On top of that, going through menopause often creates a loss of identity, a loss of one’s self. I have patients that feel as if they’re simply not in their own bodies anymore. In my practice, I like to approach sex and sexual health from a bio-psycho-social standpoint because all three factor into one’s libido and sexual health.

Can you tell us what your patients are saying about this?

I have learned so much from my patients. The consensus is that there is a lack of information about low libido. I am told that it feels as if no one talks about menopause until they’re in it, that no one is told what to expect until they are experiencing it. Another thing I hear from my patients is the idea that, “Wow, no one prepared me for this!” Historically menopause was not openly discussed, but now I’m seeing a generation that is saying, “Wait. What? This?This is happening?” Luckily this generation is becoming more vocal. If we look at the media and at popular society, as soon as women reach thirty-five they kind of disappear. Look at Hollywood where women are told to play wizened motherly roles once they hit thirty-five. We don’t actually see stories that showcase the actual transition. People who identify as women aren’t allowed to be portrayed as aging gracefully or positively. Viewers don’t get to see any of that and if you don’t see it you can’t possibly understand what’s happening as you begin going through it yourself.

Can you describe “off-label” testosterone treatment?

Testosterone is a very important hormone that is not fully appreciated in overall health. Testosterone is crucial to sexual health, it plays a role in building muscle mass, and it’s good for pelvic floor health. Studies have found testosterone to be successful in treating hypoactive sexual desire disorder in postmenopausal patients. Unfortunately, the use of testosterone for women in America is not yet FDA approved. Numerous studies, though, have shown its efficacy and many international societies recommend it as treatment for low libido. Due to the lack of FDA approval, Americans are currently being prescribed testosterone “off-label,” which means they receive the same testosterone approved for men, but they must use a different dosage (a women’s dose is one-tenth what is prescribed for men). Using off-label testosterone treatment is a game changer for women, but it may be difficult to have insurance cover it due to its FDA status.

It’s important to note that there are different formulations of testosterone. The preferred option for women is transdermal, or through the skin as in a gel or a cream. Other options include injections and pellets, although these are considered a second line approach. In my practice, I will only use these methods with women who have previously been on testosterone.

Why do you think this topic remains stigmatized?

Unfortunately, we live in a puritanical society. And as much as we want to believe we are progressive, the basis of medicine in general leans conservative. If the medical world can’t really talk about sex, how are our patients going to feel comfortable talking about sex with their providers? So much advocacy remains to be done. The beauty of it, though, is that people  are growing more vocal than ever before. I firmly believe that patient advocacy is the most amazing thing because once you start talking about menopause and sexual health, it ends the notion of suffering in silence, something women have put up with for too long. In American culture, suffering in silence is held as a glorified idea, especially for women and that is so toxic.

Is there anything else you want readers to know?

Healthcare is a basic human right that should not only be afforded one half of the population. We need to think of sex as a team sport. All of the players on the team need to be equipped. If you are playing doubles tennis, you want your teammate to have a racquet. We need to shake the mentality that only half of the population has the right to sexual health. As a urologist, I get to treat all genders and, for my patients that identify as male, I see the ease in which they receive care. My male patients know they should see their urologist for issues with libido. Who do women see? Their ob-gyn? Family doctor? Endocrinologist? Urologist? We need to be better in our medical education from the physician side in terms of bringing that same energy, that same thoroughness in the workup of low libido in women. There needs to be greater parity and right now that is not the foundation of medicine. 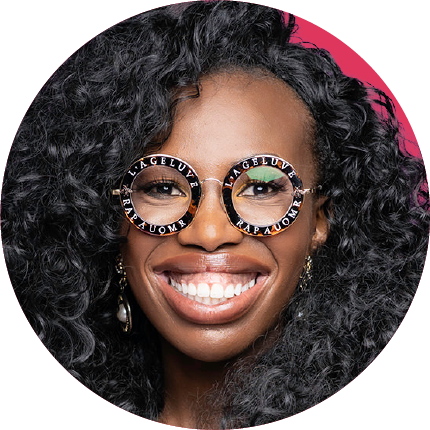 Dr. Maria Uloko is a strong advocate of improving the quality of life of her patients by providing a comprehensive, compassionate and inclusive approach to often stigmatized subjects. She believes in empowering her patients to take ownership of their sexual health by providing a shame-free space to ask questions and share their stories. She seeks to close gaps in disparities of care and implement systems that promote diversity and inclusivity.